I remember when I fell in love with VelvetBlory. I had been on Tumblr for a few years, thus accomplishing my primary goal of reserving my username. But I hadn’t done anything with my account. I’d applied an uninspiring-but-free basic theme, which I’ve since replaced with another, equally uninspiring theme. I occasionally liked a poem or reblogged a photo, and I watched my activity feed closely, so I knew it spiked whenever I posted. It spiked all the way up to one or two views. I even had a few followers, but I suspected they’d simply returned the favour when they saw I’d followed them. I doubt they ever checked out my blog; it was such a disappointment.

VelvetBlory changed Tumblr for me. I was a part of something bigger, something creative. It was through Velvetblory that I found Rakuli, a talented concrete poet (more on that), an Australian photographer and one of my kindred spirits. (I never told him that last bit, though; I just liked almost all of his posts.) VelvetBlory was what finally prompted me to start sharing my work after years of silence, with a little hashtag that I hoped would catch their attention. They never noticed me, so far as I can tell, so I worried that my work was awful; it was such a disappointment.

In 2011, the VelvetBlory crew announced they were publishing a book. Writers eagerly submitted works in the hope of a ‘real’ publication; recognising my own work was unworthy (as all writers firmly believe, except those whose work actually is unworthy), I didn’t. But I did order a copy of the final product, and when The VelvetBlory Blue Book #1 arrived I eagerly unwrapped it and placed it on my bedside table with every intention of reading a few pages each night. I didn’t, though. It lost me; it was such a disappointment.

It stayed on my bedside table for several years, unread but for the first few pages. It relocated whenever I did, living in and out of boxes until one day I forgot it existed. I didn’t recall it until I unpacked it again in mid-2014 and placed it hesitantly in the poetry section of my bookshelf. I finally read it in 2016, on a deckchair in New Caledonia. The view was spectacular; the book less so. It was such a disappointment.

I read on, though, because surely even the most awful book contains a few magical lines! Gems like this:


I remember with eyes closed and
feet moving forward.


So I underlined those gems and noted them down. I even found a few blories that I liked in their entirety, such as Title by Eric Boyd, 13 by Scottie Hughes, The Meeting by Roxy Resic (Roxanne Magdaleno) and, of course, Rakuli’s contribution: Poetry was her name.

But with its unprofessional layout, inconsistent design and grammatical errors, the compilation left me with a foul taste and a bunch of unanswered questions: why does the cover call it VelvetBlory, all one word, when the title page calls it Velvet Blory, with a space? Why does a page break separate that blory from its title? Why is this page double-spaced and that page single-spaced; why does the font change here and the numbering format there? Why have you hyperlinked text in a printed book, where I can’t click it? Why are these blories printed unedited, with grammatical errors that can’t possibly be for a deliberate stylistic effect?

And while all these questions were valid, none were so valid as the one that addressed my self-sabotage, the one I did not ask: why did I think my work wasn’t good enough to submit?

I can’t comment on VelvetBlory's more recent compilations except to say the covers look more professional. I wouldn’t recommend purchasing the first book, though, unless you're doing it solely to fund their cause—you’re more likely to find the good stuff by searching their website. But you should definitely check out the writers I’ve mentioned above.

You saw my heart

You saw my heart.
You left.

Here I played with patterns, rhythm and repetition. It's a reflection on being betrayed by someone who promised honest and loving friendship. (I believed him. He lied.) 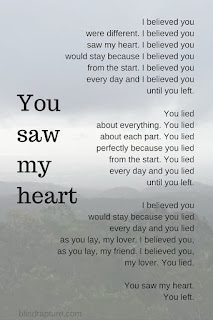 My partner and I had the good fortune to spend most of last week with at L'Escapade Îlot Maître, a lovely resort on a tiny island just a short boat ride from Nouméa, New Caledonia. We spent long days in the sun: circumnavigating the island by stand-up paddleboard or foot; lazing by the pool, reading this or that with a gin and tonic in hand; snorkelling with turtles, rays and inquisitive reef fishes. Each night we refuelled for the next day with a hearty serving of French breads and cheeses, and delicious French wines.


The resort provided everything we needed, with the exception of reliable data connectivity. Unwilling to accrue roaming charges, I made do without my phone for the most part, collecting photos on a digital camera and speaking English when my downloaded French dictionary wasn’t at hand. I expected to feel a little anxious about being offline, but I thoroughly enjoyed my time-out: a blessed reprieve from social media.

The intermittent (but free) WiFi was only frustrating when it interrupted my reading. I could readily find unfamiliar words in an offline dictionary, but sometimes I needed information. Sometimes I required a broader search universe to uncover allusions to events and their cultural contexts—especially when the writer gave me only the merest hint of a suggestion of an idea that could unlock the meaning of an entire piece.

And that, my friends, is poetry.

Poetry is not pretty words on a pastel page. It’s not the diligent demarcation of dark days in a tight text. It’s not the torrid outpourings of a yearning heart or the sharp wit of a bitter soul.

Poetry confronts you in silence, and seduces you with sound. It’s the subtlety that hides its assault. It’s the new metaphor that is equal parts figurative and literal, universal and specific.

Poetry is all these things, and nothing at all but the taste of a word on your tongue. 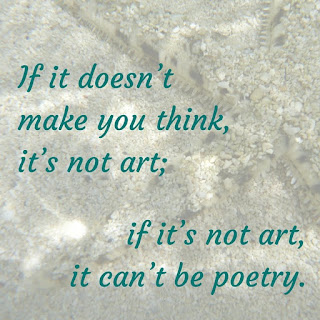